I recently had the opportunity to smoke the Rocky Patel Olde World Reserve Toro Corojo, a great cigar. I have provided a full review below. This content uses referral links. 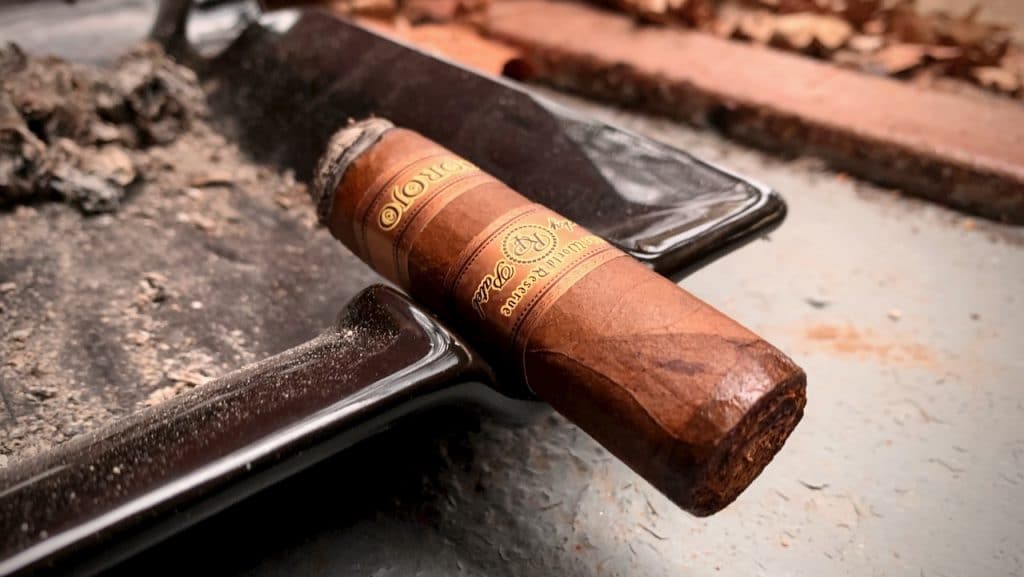 A recent shipment from Cigar of the Month included the Rocky Patel Olde World Reserve Toro Corojo, a fantastic cigar.

A Honduran stick with a mixture of Honduran and Indian tobacco, this was an absolutely excellent smoke.

Cigar of the Month recommends pairing it with a hoppy India Pale Ale. As is my usual habit when tasting cigars, however, I enjoyed mine with a good cup of coffee. I thought they went together just fine.

In my grading system and review below, I have adopted the Cigar Journal: For the Discerning Aficionado method. It provides an excellent system for keeping track of my favorite smokes, and I recommend it to any cigar smoker.

Look of the Label

As the picture indicates, the label was eloquent and well done.

Condition of the Cigar

The Rocky Patel Olde World Reserve Toro Corojo had some very minor flaws—some wrinkling in the wrapper near the foot, for example—but it was obviously well constructed and in generally good condition.

Feel of the Wrapper

The cigar felt slightly inconsistent, with some parts much firmer than others. This, along with some very pronounced veins, left me concerned that I was in for some burn problems.

Unfortunately, this did, in fact, bear out.

Aroma of the Wrapper

The pre-lit cigar smelled terrific. The aroma was subtle, with hints of earth, cream, and leather.

The cut was perfect. I was able to slice off the cap quickly and without issue. The structure of the cigar remained intact with no unwrapping.

I had some minor trouble getting the cigar to light up. Some areas of the foot just did not want to take to the flame, resulting in an initially uneven burn. The trouble was minimal, however, and the issue quickly resolved itself.

The Rocky Patel Olde World Reserve Toro Corojo had a perfect draw from beginning to end. It provided just the right amount of resistance, allowing for a smooth, easy draw from the very first puff until I finally put the cigar down.

On the retrohale, the cigar had flavors of cream with some hints of black pepper that had a bite to it. It was a bit strong for my taste, but delicious nonetheless.

Flavor on the Palate

The Rocky Patel Olde World Reserve Toro Corojo was simply delicious. It was a medium-bodied smoke with hints of cream and pepper and the slightest bit of leather. It was a bit strong, yet smooth and mellow.

I never did pick up on the flavors of cocoa other reviewers have noted, but that didn’t take anything away from the smoke for me.

This was a genuinely pleasurable smoke consisting of perfect flavoring. I couldn’t nitpick here if I wanted to.

The Aroma of the Smoke

The cigar’s smoke smelled of earth and pepper, but it was very subtle. It was hard to distinguish even these prominent aromas in the smoke.

There was some minor canoeing that developed at first and persisted for maybe an inch or so. It quickly evened up, however, and remained consistent throughout the rest of the smoke. While the burn line was never razor-sharp, after the initial trouble, it continued evenly, and the burn itself was low-maintenance throughout.

The ash was great. While it didn’t demonstrate the solid strength that I really like to see, it was close.

Effects of the Smoke

The Rocky Patel Olde World Reserve Toro Corojo left me feeling mellow and relaxed. Despite being slightly on the stronger side, it never gave me any feeling of a nicotine high.

It made for a wonderfully relaxing and mellow smoke.

The cigar was obviously well-made. No flakes of tobacco found their way into my mouth at any point during the smoke.

This was a fantastic cigar. There was very little about it to criticize, and I hope that I have the opportunity to smoke another one soon.

At about $9.20 per cigar, however, it may have to wait for a special occasion.

Cigar of the Month Club

As always, I recommend Monthly Clubs’ Cigar of the Month Club. I’ve been a member for years. If you sign up, you’ll get five premium cigars delivered right to your door every month.

(There’s also a more expensive Rare Cigar Club available, for those who are interested.)

The club has provided me with the opportunity to try fantastic cigars like this one regularly. I’m starting to build up quite a little catalog of tasting notes to help me select future smokes and further refine my palate and tastes.

The opportunity, along with the ability to learn more about cigars in general through the accompanying tasting notes, has been an invaluable experience for me. I have enjoyed being a member, and I recommend giving it a try.

If you’re interested and would like to use my referral link, I would appreciate it. Just click here. If you’d prefer not to use my link, however, I still recommend the club. Just go to Monthly Clubs’ Cigar of the Month website to explore Monthly Clubs’ offerings. 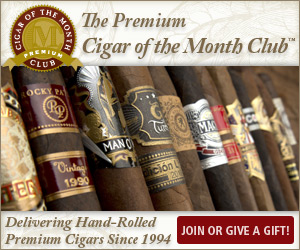 If you've enjoyed my website and would like to help me keep it going, I would really appreciate it.

Spread the loveI recently smoked the CLE Plus 2013, one of the best, if not the best, cigar that I have ever had. I have provided my full review below. This content uses referral links. Estimated Read more…

Spread the loveI recently sat down to rate the Drew Estate Tabak Especial Corona Dulce, a personal favorite of mine. I have provided a full review below. This content uses referral links. Estimated Reading Time: 4 Read more…